The Hollywood Farmers Market: Then and Now

Editor’s Note: The UC Food Observer shares content with our media partners at KCET in Southern California. We’re delighted to share this excerpt from a #longread by Julie Wolfson. It’s about the Hollywood Farmers Market: Then and Now. It appears as part of KCET’s remarkable Migrant Kitchen series. Photos by Jenny Kim.

Wolfson says this in the piece:

“Heritage and history lead to the future of the culinary landscape.

Tracing the path of produce from farms all over the state to the market and into the kitchens of homes and restaurants tells the story of the diversity of culinary stories in California. The Hollywood Farmers Market is a good example of how the community in Los Angeles preserves tradition while growing and changing.”

You’ll definitely want to visit if you’re in the area; the Hollywood Farmers’ Market is open every Sunday from 8 a.m. to 1 p.m. rain or shine.

Click the link at the end of this mini-post to access the full article. Related: Read this piece about the history of agriculture in Los Angeles County. You may also enjoy this KCET piece on the struggles of growing organic-certified Asian produce in Southern California.

On an overcast Sunday morning, Carl Tassi holds a bugle up to his lips and plays a few loud toots to signal the beginning of the market day at the long-running Hollywood Farmers’ Market. He then walks down Ivar Avenue to play drums with his trio. Their melodies fill the morning with Take Five and other jazz standards. Nearby, Phill Kim and Kevin Hickin of Collage Coffee set up their espresso cart at the corner of Ivar and Selma ready to make some much-needed coffee for market customers and workers. It is early in the morning, but the farmers have been up earlier — even before dawn, packing their trucks, driving to L.A. and preparing for a busy Hollywood Farmers’ Market day. Some have traveled from as far as Fresno.

Founded in 1991, the Hollywood Farmers’ Market started as a way to improve the quality of life in Hollywood for residents and businesses alike. At the time, farmers markets were a new concept in the city, only about ten existed. On that first day, May 1, 1991, farmers set up their stands wondering if the shoppers would come. Vicki Bernard of Bernard Ranches was one of those intrepid farmers. She stood behind a table filled with vibrant citrus fruit, waiting to see if her gamble would pay off. More than a quarter-century later, you find can still find her there every Sunday, surrounded by the cheerful bustle that’s the Hollywood Farmers’ Market.

Opening a farmers market in the heart of Hollywood at a time when there were few markets in Southern California was a gutsy move. Along with Bernard Ranches, Beylik Family Farms, Flora Bella Farms, Kenter Canyon Farms, McGrath Family Farms, Tamai Farms, Tenerelli Farms, Tutti Frutti Farms, and Weiser Family Farms are among the list of legacy farmers who have been part of the Hollywood market since the beginning.

Today the market has grown to more than 160 vendors of produce, prepared foods, meats, and seafood. This colorful bustling community reflects the diversity of the culinary offerings in Southern California. This market, as well as markets in Atwater Village, Baldwin Hills Crenshaw, Central Avenue and Watts, is run by non-profit SEE-LA.

Food writer and former Food Editor of the Los Angeles Times, Russ Parsons, shopped at the Hollywood Farmers’ Market on day one.

“I was actually at the very first market. I remember it was raining,” says Parsons.  “At that time the Southern California farmers market scene was very different. There weren’t farmers markets everywhere the way there is now.”

“I remember walking down that street and looking at it and thinking, this is something that is so different from what that neighborhood is thought of,” Parsons says. He remembers thinking how ironic it was to have a market selling fresh fruit and vegetables in a neighborhood that was associated more with nightclubs and crime than with health and nutrition.

Though Parsons still believes that the Wednesday Santa Monica market continues to be a hub for chefs to source, shop and connect with other chefs, he acknowledges that a significant number of restaurants have opened east of Fairfax. The Sunday market has developed its own allure. “The thing about Hollywood since it opened is that it is a good representation about how the culinary world in Southern California has spread. The Hollywood Market has become the hub for that eastward spread of good restaurants,” he says.

Now chefs can be found walking the streets of Hollywood on Sundays shopping for their restaurants or enjoying time with family and friends. Each week market goers might see Jon Shook or Vinny Dotolo shopping with their families, Diep Tran sourcing ingredients for Good Girl Dinette, and the teams from Sqirl, Gjelina and Mozza gathering up orders along with Food Network personalities, journalists and culinary community celebrities.

To make all of this happen on Sunday mornings in Hollywood, market managers Elizabeth Bowman and Ariell Llunga have long to do lists to tackle. Elizabeth Bowman arrives at 6 a.m., straps on her fanny pack and gets ready for whatever the day has in store for her supervising 75 to100 farm produce stands.

“Most farmers have been here long before me and will be here long after me. When I do get the rare opportunity to bring in a new farmer, I prioritize vendors who can bring something under­represented to the market,” says Bowman. “The market has been around for 26 years now, customers and vendors alike feel a real sense of attachment to the market. We know that decisions made today have a lasting impact.”

Manager Ariell Llunga runs the Community events section of the market including hot and prepackaged food as well as the artisans. The center of the market has become a weekly hub for chefs, cookbook authors and promoting fundraisers like Taste of the Nation, Alex’s Lemonade Stand and Bake & Gather. “Elizabeth and I brainstorm frequently on how to activate the center of our market. In the last year, we’ve hosted authors like Bill Esparza and Elina Fuhrman for book signings, held chef demos and food workshops and of course ever popular ‘Peak of Season’ festivals,” says Llunga. The recent Tomato Festival offered market-goers the chance to taste dozens of varieties of tomatoes while watching chef demonstrations.

Follow this link to read the rest of the story. 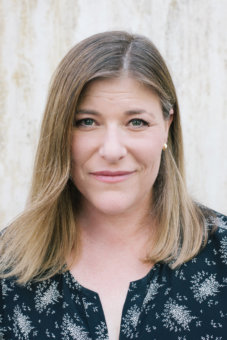 Julie Wolfson is a freelance writer. Her writing has been published in the Los Angeles Times, HOW Magazine, LALA, Angeleno, The Henry Ford Museum Magazine, Cool Hunting, and many other culinary, design, and lifestyle publications.