In this guest blog post, you’ll learn about the Community Table Project at the UC Davis Student Farm, a new effort that’s addressing campus food insecurity and starting an important dialogue around the intersections of people, place and food.

She’d recently started volunteering at the Student Farm at UC Davis as a way to de-stress from her hectic class schedule.

At the time, a study had just been released showing the upsetting reality of food security on UC campuses, and the Student Farm, a program of the Agricultural Sustainability Institute, was strengthening its efforts to deliver free excess produce to students across the UC Davis campus.

As Dana learned about the conditions across campus and dove deeper into food security issues, her casual visits to the Student Farm turned serious.

“At the time, I understood what hunger meant,” says Dana. “But I wasn’t aware of the concept of being food secure. And for me, once I saw it, I couldn’t un-see it.”

Dana became involved in the early stages of the Community Table Project at the Student Farm, an effort to increase the amount of fresh produce provided to students on campus (called Fresh Focus), while also raising awareness of food issues around campus (called Community Connections). The Community Table Project received funding from the Global Food Initiative to help address some of the findings in the 2016 Student Food Access and Food Security Study for the 10 UC Campuses .

Fresh Focus is the continued and growing effort to provide free produce to students on campus, which currently delivers free produce to The Pantry and Fruit and Veggie Up! on campus and is developing partnerships to expand delivery.

Today, Dana coordinates the Fresh Focus program, which recently reached the milestone of donating 10,000 pounds of free, fresh produce to students on campus.

“When two UCD students began Fresh Focus in 2013, it was an initiative to address both food waste at the student farm and food insecurity on campus,” says Dana. “With support from the Global Food Initiative, we’ve really shifted our primary focus to addressing food security and access issues on campus. Now, along with gleaning excess produce from the farm, a dedicated space on the farm is used to grow produce specifically for campus delivery. A team of nine Fresh Focus interns manage the logistics of harvesting, delivery, and program promotion efforts.

As produce deliveries increased, it became obvious that there was a lot of additional support still needed. Students were unfamiliar with produce being delivered, or didn’t know how to prepare the food they were offered.  The Student Farm is set up to better connect students with their food, but there are barriers to it being a space that’s accessible to all students.

First, many students on campus have not heard of the farm. Others consider the farm a space dominated by white students, and are unsure about how to engage with the community. A study conducted by graduate student Marisa Coyne confirmed that one popular class offered at the Student Farm was primarily filled with white, female-identifying students.

Abraham Cazares, a recent graduate of the Sustainable Agriculture & Food Systems major at UC Davis returned to campus to join the Community Table Project and help transform the Student Farm into a more inclusive space, and bring the learning and engagement happening there out to the greater community.

“The project has given me the opportunity to work at the Student Farm in a way I had been wanting to work when I was a student here,” says Abraham. “We’re working to connect with communities across campus, and I feel reinvigorated every time I engage with students on campus.”

Throughout 2017, Chicanx Studies Professor Natalia Deeb-Sossa brought four of her classes to the farm to tie garden-based activities in with her curriculum. Students learned how to prepare a garden bed for planting, planted seeds, and later harvested their produce.  They created their own herb bundles and learned the medicinal properties of different herbs grown at the farm.

“Students in the class expressed that this reminded them of home,” says Abraham. “Students reminisced about working with grandparents in their gardens, making tea out of herbs, or picking peppers with family.  Many felt safe and secure, which was one of our intentions.”

For both Abraham and Dana, the Community Table Project of the future will have a much bigger table. They see the program reaching greater numbers of students, and connecting with more local farms and grocery stores. They see students, faculty, and administrators working together towards the big goal of making UC Davis a food secure campus, and they see classes across disciplines visiting the Student Farm to link food issues with their curriculum.

In the future, they hope the Community Table Project will be integrated across campus, using food as a tool to nourish a healthy campus and inclusive campus community.

Editor’s Note: The UC Global Food Initiative was launched by University of California President Janet Napolitano in 2014. This ambitious initiative is addressing one of the most compelling issues of our time: how to sustainably and nutritiously feed a world population expected to reach 8 billion by 2025. And it’s pulling together all 10 UC campuses, five medical centers, UC’s Division of Agriculture and Natural Resources, Lawrence Berkeley National Laboratory and the UC Office of the President to achieve these goals. 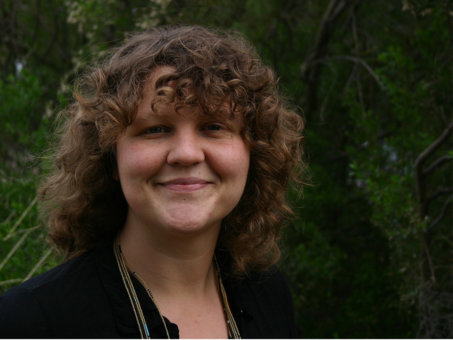 Aubrey Thompson is the Communications Coordinator at the Agricultural Sustainability Institute at UC Davis and has served as outreach and engagement coordinator for the California Nitrogen Assessment. Aubrey earned her Master’s degree at UC Davis in Community and Regional Development where she focused on science communication, risk communication and public outreach from research institutions to fishing communities in the Sacramento-San Joaquin Delta.

She is a trained facilitator and media producer and seeks ways for innovative communication and storytelling to improve the viability of sustainable agriculture.

She has several years of farming experience and previously co-owned and operated a small farm in California’s Central Valley.