If Farm Dogs Ran the World

If farm dogs ran the world, we would never have needed to discover coffee. With an adult life spent largely in agriculture and the military, I am no stranger to early mornings. But I have never learned to embrace them with the enthusiasm shown by my dogs. It would take me a few pots of coffee to get going the way they do at the mere sight of rubber boots before sunrise.

That sheer burst of daily enthusiasm may be an under-appreciated trait among farm dogs. The nature of agriculture is that it often involves doing dirty and demanding work in weather or at times when you would prefer not to. That is the job. Sometimes sharing it with someone who is ecstatic to be digging up a broken irrigation line when it is over 100 degrees makes it just bearable enough to get it done.

I discussed this with Ludwig the other day during a run into town to pick up diesel fuel, irrigation parts and gopher traps. Most would look at Ludwig and easily identify him as a German Shepherd, which is true enough. But farmers and ranchers would quickly recognize him as a “truck dog”, something that transcends the simple anatomical traits that we refer to as a “breed.”

Being a truck dog is something deeper; something spiritual. When a truck dog is in his or her truck, all is well with the world. A truck dog who is very high energy normally (as Ludwig is) enters a zen state riding shotgun in the pickup. Ludwig was in this state as I outlined my thoughts on the matter. He made no comment, but I think he recognized the truth in my thesis.

After loading the supplies and swinging by the Post Office, we continued in silence to the other ranch. He watched the fields and orchards as we passed, while I thought further about the strange bonds that form between man, canine and location. If he had thoughts to add, he kept them to himself, but I enjoyed his company all the same.

Arriving at the Saticoy ranch, I stored the supplies in the barn and took the mail to the office. An hour or so of opening envelopes and paying bills ensued. With nothing to contribute to this activity, Ludwig was soon sound asleep behind the printer stand.

Refreshed from his nap, he joined me as I headed out on foot to inspect some recently grafted fig trees and a newly populated beehive at FarmLab.

One place that Ludwig and his fellow farmdogs don’t usually go is FarmLab. This is an educational program we host that introduces third-graders to plant science, soil biology and entomology in a hands-on, fig orchard setting.

Usually, Ludwig’s presence there would be amusing to some, intimidating to others and profoundly distracting to all… he tracked me down there once and proved this to be so. But this day, there are no classes to disrupt.

But perhaps instead of disrupting the lesson, he could be part of the lesson.

Most of us no longer understand that the species that surround us are the results of human actions. Domesticated plants and animals have been around for so long that we think of them as being part of the natural world, but that is rarely the case. Few among us could easily identify the species that people turned into corn or peaches or chickens.

But with dogs we know that they descended from wild ancestors, and we understand the role we have played in their evolution. We understand that they have been bred to conform to human needs, and that is a process that is ongoing…. New breeds, hybrids, and crosses occur all the time. Poodles, chihuahuas and rottweilers are all the same species. Could they illustrate that the same processes are at work on the plant and animal species that end up on our plates? Are those dog breeds any less alike than broccoli, kale and cabbage, three different vegetables from the same species of plant?

Again, my speculation is met with no response, but to be fair, Ludwig isn’t really listening just then. We have met up with our foreman Carlos, and Drover, the Australian Cattle dog. Unlike his colleague Ludwig, Drover doesn’t like riding in vehicles. But he does have an affinity for them, thanks to his herding genetics. With no livestock to work, he keeps close tabs on all farm equipment, and rarely will take a break from his duties until all are secure in the barn at the end of a workday.

Once the four of us have finished examining the gopher issues in the fig orchard, Ludwig and I head back to the truck. On our way home, we resume our discussion. I resolve to learn more about the history of working dogs on the farm.

I know that dogs were the first species domesticated by mankind. Is it correct to think that the domestication of dogs opened our eyes to the possibilities of animal genetics? Do dogs represent mankind’s first step away from the hunter/gatherer social order toward livestock-based pastoralism, settled agriculture, civilizations and iPhones? Perhaps without dogs, we would never have had farms, and everything that followed.

Home for the night, I spend a little time with our litter of puppies. The cheering effect of puppies is immediate and undeniable, but still I wonder: Which of these will remain a farm dog? Which among them will leave the farm for a life in the suburbs? What will their future be?

The life of a farm dog is changing, and perhaps the golden age of farm dogs is behind us. After centuries as livestock guardians, ratcatchers, herders, and watchdogs, dogs are no longer as welcome in agriculture as they once were. Under some food safety guidelines, the presence of a dog is penalized more harshly than evidence of rodents. Sigh.

And yet… new jobs for dogs are emerging all the time. Perhaps one of these pups will be the first in Ventura County trained in detecting the distinctive scent of citrus trees infected with the Huanglongbing bacteria. With a few million trees at risk spread over 20,000 acres of citrus in this county, I hope this pup will learn to love traveling by truck as much as Ludwig does.

Editor’s Note: The Sayers have four working dogs: Drover, Otto, Phoebe and Ludwig, as well a new litter of farm pups. FarmLab – hosted at Petty Ranch – is part of a unique agricultural literacy program offered by SEEAG (Students for Eco-Education and Agriculture). Learn more about SEEAG – here. Chris has authored a book of essays about farming – Picking Our Future: Essays on Food, Change, and Farming. it’s available here. You may also want to read these other pieces and guest blog posts relating to Chris’ work as a farmer in Ventura County: 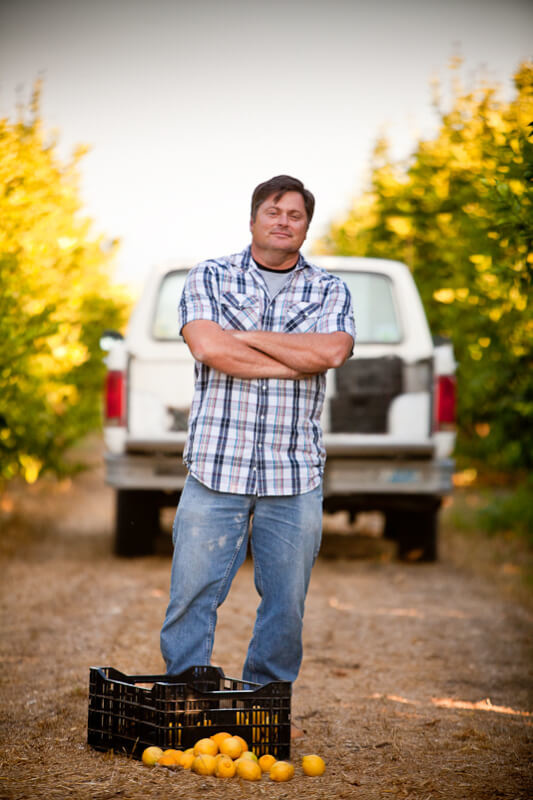