Editor’s Note: The hunt for an elusive bumblebee in the high Arctic is the subject of this guest post written by Sean Nealon, Senior Public Information Officer, University of California, Riverside. The UC Food Observer is delighted to share this fascinating story with our readers.

Several days into a more than 1,000-mile trip this past summer in northern Alaska, a team of six University of California, Riverside scientists netted a bee that led team leader Hollis Woodard to say:

“It’s the biggest frickin’ bumblebee I have ever seen.”

They didn’t know it at the time, but the bee turned out to be Bombus polaris, one of only two species of bumblebee in the high Arctic, and the main reason the team of biologists, entomologists and ecologists came to Alaska.

They want to better understand how the bee survives in this extreme environment and what impact climate change is having on it. Bumblebees are the most economically important group of native pollinators in the United States, but some populations are undergoing a precipitous decline. The implications of the researchers’ findings could be significant because B. polaris is the primary pollinator of about 80 plants threatened in the Arctic.

During the two weeks in late June and early July, the team traveled from Fairbanks, Alaska to Deadhorse, Alaska, just south of the Arctic Ocean. The sun did not set the entire trip. The mosquitoes were often unbearable. Cellphone service and Wi-Fi were virtually nonexistent.

Most of the travel occurred on the Dalton Highway. Over 414 miles, it switches from pavement to packed gravel and dirt, with a healthy mix of dust, mud and bumps caused by melting permafrost. Built in the mid-1970s, in conjunction with the Trans-Alaska Pipeline, the road gained fame from the show “Ice Road Truckers.”

Hollis Woodard, an assistant professor of entomology at UC Riverside, led the trip. She arrived at UC Riverside in the summer of 2015 as part of a recent wave of pollination experts who have been hired. Within months, she had assembled the Alaska team.

Most days were spent driving the highway, stopping at patches of wildflowers and searching for bees. When a bee was spotted, the researchers would swoop in with an insect net and then carefully funnel it into a plastic tube. Some days, only a few bees were caught. Other days, up to 80 were caught.

Once the bees were in the plastic tubes, it was time to process them. Bee processing took place assembly line-style, with the researchers recording the time and place of collection, bee species, food source, quality of pollen and gut health.

They then preserved each bee’s pollen load to understand its diet and removed its guts to understand what disease-causing organisms might be present, something which could offer insight into what pathogens are causing bumblebee declines. Finally, each bee was placed in a tube filled with ethanol to preserve it for future genetic analysis.

They believe the research they are doing related to B. polaris will provide a much-needed understanding of the species. The International Union for Conservation of Nature recently assessed the status of bumblebees worldwide due to alarming population collapses in Europe, North America, South America and Asia. The group placed B. polaris in the “data deficient” category. When describing the records and collections of the species, it includes phrases such as “need to be checked,” “uncertain” and “under sampled.”

Bumblebees in Alaska have a short season. Queens live for about a year. Worker bees have a life span of about a month; during that month, they build colonies, forage and reproduce.

Queens emerge in the fall as adults, mate over winter and start colonies in spring. During the winter — when it gets down to 60 degrees below freezing — only queens survive; spending the time in an inactive state. In the spring, they forage and raise their temperatures to build their colonies.

Bumblebees also play a critical role as pollinators. In fragile ecosystems such as the Arctic, where there is an abundance of rare and endangered plants, visitation by a pollinator can keep a species from going extinct. Likewise, pollinators depend on flowering plants for food. Yet, dramatic changes in the Arctic flowering plant community are leading to mismatches between pollinators and their floral resources.

With that in mind, in addition to collecting the bees, the researchers were taking samples of the plants and the flowers where they found the bees. Some important arctic plants pollinated by bumblebees include wild berry species (blueberry, lingonberry, cloudberry, cranberry), which produce fruits eaten by local people and wildlife. Also, willows flower very early in the year, providing food for bumblebee queens as the snow melts.

During the Alaska trip, the scientists netted about 700 bees, including more than 40 B. polaris. They also got samples of the five species – B. balteatus, B. sylvicola, B. melanopygus, B. occidentalis and B. mixtus – that they will compare to the California samples of the same species.

The team is now analyzing the genomes of some of the bees they collected. They want to better understand how the bees have adapted to arctic conditions and weeks of uninterrupted daylight. They want to learn more about one of the least-understood pollination systems on Earth. And they plan to take the data they collect to provide a better view of the status of the bees.

Woodard deemed the trip a success. They found the bees they were looking for. They met scientists at the University of Alaska Fairbanks who will likely be key partners in future research. Attention from a New York Times story about the trip led other Arctic and bumblebee research groups to reach out to the UC Riverside scientists about possible collaborations. And they got the preliminary data they needed to make the case for a National Science Foundation grant that would allow them to travel to other Arctic regions around the world to further study B. polaris.

As Woodard explained, “This trip put us in a great position to seek more funding to continue this research around the world so that we can better understand and preserve this extreme bee.”

Learn More: This 4-minute mini documentary takes you along on the amazing journey in search of the arctic bumblebee (see more in this UC Riverside Magazine story): 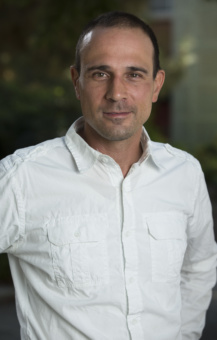 Sean Nealon is a senior public information officer at the University of California, Riverside, where he writes about science and agriculture research. Prior to working at UC Riverside, he was a newspaper reporter in New York and California. He has a master’s degree in journalism from Columbia University and undergraduate degrees in sociology and communication from the State University of New York at Buffalo. He is a UC Cooperative Extension master gardener and an avid backyard gardener with 18 fruit trees in his yard.