As you drive north on the U.S. Highway 101 Freeway from downtown Los Angeles, you probably don’t realize those picturesque open spaces about an hour away are some of the most productive farmland in the nation.

In fact, Ventura County is the nation’s eleventh largest county in crop value, despite its close location to the country’s second most populous city. Ventura County’s agricultural sector earned an estimated gross value of more than $2 billion dollars in 2017, according to the Ventura County Crop and Livestock Report 2017. That’s despite the fact that the United States Census Bureau reported there were more than 854 thousand Ventura County residents in 2017. How do they do it?

“For every acre of buildings and pavement in Ventura County, there’s an acre of strawberries, lemons and other crops,” explains the Farm Bureau of Ventura County. “One in 10 Ventura County households relies on income related to agriculture, which supports 45,000 jobs.”

It helps to understand that farming has a long heritage in Ventura County. When the Mission San Buenaventura was established in 1782, livestock and crops were introduced. Grain, cattle, fruit and vegetables were brought in to support the settlement.

However, it wasn’t until the Civil War that large-scale farming began in earnest, reports the Farm Bureau of Ventura County. By 1880, there were already 573 farms with more than 81,000 tilled acres. Just 10 years later, those numbers would jump to 764 farms with more than 137,000 acres of mostly grains like wheat and barley.

By 1914, the Ventura County Farm Bureau began operating with 300 members, thanks to several legislative acts that established the nation’s land-grant colleges, agricultural field stations and the creation of the University of California Agricultural Extension Service and Farm Advisors. At that time, the top crops were walnuts, apricots, lima beans, oranges and lemons.

More than a century later, you’ll find those crops still growing at Ventura County farms. About $259 million worth of lemons were sold in 2017, making them the number-two crop for the county. The top spot belongs to strawberries at $654 million. Celery, nursery stock, raspberries, avocados, cut flowers, tomatoes, peppers and cabbage round out the rest of top ten crops. Ventura County boasts 20 additional million-dollar crops, ranging from kale, blueberries, Asian vegetables and oranges to cucumbers, spinach and lettuce.

The Thomas Fire in December 2017 — which was the largest fire in California’s history at the time — caused more than $170 million in agricultural damages, primarily with the avocado, citrus and cattle industries. All 7,000 acres of rangeland that RA Atmore & Sons and Rancho Ventura Conservation Trust steward were impacted by the fire.

“The rangeland is already recovering, as the vegetation naturally regenerates,” reports John Krist, Chief Executive Officer, Farm Bureau of Ventura County in the 2017 Crop Report. “Citrus within the fire perimeter suffered only marginal losses, as lemon, orange and mandarin orchards are generally quite fire-resistant. But for the hardest-hit avocado groves, recovery will take years.…It’s likely that we will still be tallying the losses from Thomas a decade from now.”

Many local residents want the farms to stay. For example, a county-wide grassroots initiative called SOAR (Save Open Space and Agricultural Resources) led to legislation that “requires a majority vote of the people in order to rezone unincorporated open space, agricultural or rural land for development,” explains its website.

Voter-approved SOAR initiatives have been passed by the cities of Camarillo, Fillmore, Moorpark, Oxnard, Santa Paula, Simi Valley, Thousand Oaks and Ventura. They were renewed in November 2016, extending their expiration date to 2050.

Connecting the community to the food system is vitally important for the health of individuals and the survival of local farms, according to Rose Hayden-Smith, Ph.D., who is the editor of the UCFoodObserver.com, an online publication for the University of California (UC). A long-term county resident, Hayden-Smith was previously sustainable food systems initiative leader for UC’s Ag and Natural Resources division.

“Everyone eats: everyone is a stakeholder,” says Hayden-Smith. “I would like people to be engaged with the food system, and to advocate for positive change. Think about where your food comes from and ask critical questions about the supply chain. Meet people who are involved in producing, processing, distributing and preparing the food you eat. Honor them with questions about and interest in their work.”

Phil McGrath is the fourth generation of his family to farm on the Oxnard Plain in Ventura County. The U.S. 101 Freeway runs literally right through the McGrath Family Farm. (So, you’ve driven through it on your way to Santa Barbara.)

When the McGraths started farming back in the 1860s, they did cattle ranching and later dairy farming, lima beans and sugar beets. Today, the farm’s remaining 300 acres are more focused on row crops, and 85 percent is organic. McGrath Family Farm sells directly to consumers via farmer markets, a roadside market, Community Supported Agriculture (CSA) memberships, as well as to many restaurants in Southern California.

McGrath is known locally as a farm educator and is a member of the Los Angeles Food Policy Council. The grower helped to start an active Farm to School program in Ventura County and has conducted farm tours for students of all ages and delegations from across the globe for more than 25 years. In 2017, McGrath was named “Farmer of the Year” at the VC Ag Week Awards.

McGrath talked to KCET and UCFoodObserver.com about how farming has changed and some of the challenges to keeping it viable in Southern California.

“Water is four times more expensive than it was four years ago if you still have access,” explains McGrath. “Environmental and urban issues have restricted farming to a degree that many farmers feel very limited. Market demand means most Ventura County agricultural products are exported. Because of global marketing issues, it’s nearly impossible to compete with products from Mexico and South America.”

Down the road from McGrath Family Farm is Petty Ranch, which was established in the 1870s by Chris Sayer’s family. Today, the food entrepreneur’s farm grows lemons, avocados, specialty citrus and figs in Santa Paula. He is the fifth generation to farm and he agrees farmers face challenges that the general public doesn’t often understand.

Sayer explained to KCET and UCFoodObserver.com that ever-increasing business challenges and complexity of regulations require a broadening skill-set when working in agriculture. “A farmer now needs to know land policy as well as the county regulators,” says Sayer. “They need to know estate law as well as their attorney does, tax planning as well as the IRS. And the consequences for being wrong are only getting bigger. Contrary to stereotypes, farmers are often intelligent, educated and sophisticated … but nobody can be a master of that many subjects … it’s challenging.”

One of the biggest benefits for local food is it connects the community to the issues around agriculture, reports Sayer. “If they are interested in what we do, care about what we do, that’s probably to our benefit in the policy arena. If they don’t understand or don’t care, it puts us as producers in a very bad place. Feed them and they will care.”

Meet Mary Maranville of Students for Eco-Education and Agriculture (SEEAG)

Mary Maranville agrees with Sayer. She is passionate about helping Ventura County children and communities connect and care about local farms. In 2008, she founded SEEAG in honor of her father, a dairy farmer in upstate New York.

On SEEAG’s website, she explains, “…I knew I could make a difference educating school children about the farm origins of their food and agriculture. Now, after providing over 25,000 school children with free field trips to local farms, there is not a day that goes by that I don’t think and appreciate my father. … SEEAG is dedicated to my father and was founded to create agricultural ambassadors with the hope they will help preserve family farms around the world.”

To reach even more people with their farm-friendly message, SEEAG hosts an annual Ventura County Farm Day. In 2019, the seventh annual event will be held Saturday, Nov. 9, at locations around the county.

The public is invited to visit more than 20 Ventura County farms, ranches and agricultural organizations for the free self-guided Ventura County Farm Day. Based on your interests, you can tour an organic farm in Ojai. Watch a goat’s milk soap demonstration in Filmore. See tomatoes being grown hydroponically in Oxnard. And that’s just a few of the fun farming activities and tours available.

Learn more about  Farm Day, see last year’s farm map and reserve a spot for the farm-to-table event that evening.

Museum of Ventura County’s Agriculture Museum in Santa Paula preserves and tells the story of farming in the region. It’s open 10 a.m. to 4 p.m., Wednesday through Sunday.

Enjoy old photos, vintage fruit labels, postcards and other historic images? Visit the Museum of Ventura County’s Research Library with more than 40,000 images from 1864 to the present. It’s free to the public and open temporarily from 11 a.m. to 5 p.m., Wednesday through Friday. 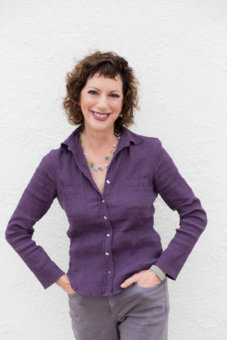 Teresa O’Connor is a food reporter, who was the assistant editor of UC Food Observer. Her articles have been published in Horticulture, Civil Eats, Yes! Magazine and other publications, including the cooperative extension services for California and Idaho. She created FarmFreshLowCarbLiving.com to educate about healthy low carbohydrate lifestyles.