A few months ago, I was asked to write a blog post for the Organization of American Historians blog – Process – about my experience teaching a class I call the “History of Food.” The gist of the blog post – which you can read here – is that I use food and the study of food to teach about other topics such as labor, immigration, colonialism, imperialism and slavery (among others).

Although the class begins with humans harnessing fire, I am a modernist and the second half of the class takes place in the modern era. By the time we get to the 20th century it isn’t difficult to get students interested in what has happened to the modern farm.

They have learned about the rise and fall of various agricultural societies. For instance, we look in depth at the salination problems of the Sumerians during the Bronze Age and the effects of climate change on the Garamantes of north Africa in the 2nd century AD. The lessons are not lost on the students and they are anxious to learn about the problems of modern agriculture.

I am quick to remind the students that every historical situation is unique and contingent on different factors, but it does remind me of the quote often attributed to Mark Twain: “History does not repeat itself but it does rhyme.”

For 10,000 years, the major contours of agriculture remained relatively consistent, but the modern farm has undergone such drastic changes in what amounts to a fraction of a blip on the historical radar. Mechanization, the Haber-Bosch Process, chemical pesticides and herbicides and genetically modified seed are some of the most obvious examples. In other words, there is a lot to cover.

But teaching this year and in this political context things seem a little different. Students seem to be more engaged than I can remember. Given the emergence of “alternative facts,” students seem to be more interested in gaining the skills to discern lies from facts than ever before. My office hours are busier and class is livelier. My discussion section leaders are noticing it too. We haven’t even started talking about immigration and labor and with a room full of first-generation kids I imagine class is going to get even livelier.

My approach towards teaching, however, remains very much the same. While the current “sound and fury” surrounding deportations is disconcerting, we cannot ignore the fact that former President Obama deported more people than any previous administration in this nation’s history. It doesn’t change the fact that during 200 plus years of this country’s history, the majority of people laboring in agriculture have been black and brown bodies. It doesn’t change the fact that small family farms have been disappearing from the landscape since the end of the second world war. Nevertheless, I am enjoying the new-found energy from our student body and have plans to harness it after the course ends.

I have been teaching the class for a few years now, and I was always left at the end of the semester with one major frustration. After having gone through the class, students always wanted to do something about the food system. The problem was I had nowhere in the Valley to send them. In those early days, many of them went to the Bay Area and I felt like I had in some ways let the Valley down.

As a result, I began to make connections with various organizations in the Central Valley that worked on food issues. Over the years, I have developed a close relationship with the folks over at Food Commons Fresno. The Food Commons is invested in growing a community food system that fosters health, stewardship, equity and economic development. To date, they run an organic farm, a distribution center, a storefront and a subscription service. They are dedicated to sharing the profits of all their endeavors with the workers who produce the food. That is one of the primary reasons that I decided to join their board of directors this year. We are currently working on developing internships in conjunction with UC Merced to help students make the transition into food justice work.

On that same note, I have been working with UC Merced’s sustainability director – Colleen McCormick – on campus initiatives, including some that are sponsored through the UC Global Food Initiative. Amongst those is the work of Isabella Beltran, a GFI Fellow who is expanding our existing garden, building a food literacy program for UC Merced students called Bobcat Eats, developing a food speaker series and establishing farmer’s markets on campus. Isabella and I have collaborated on presentations both for class and outside of class.

The project I am most proud of, however, is the conference that I help organize with my community partners the California Institute for Rural Studies. On March 22 at UC Merced, we are hosting community members, activists, farmers, and researchers, at our 2nd Annual Rural Justice Summit. The event is designed to create dialogue between community members and researchers to build communication networks that will facilitate the kind of research that not only benefits academics but also the community.

Last year we had 100 participants and this year we expect to double that number. We’ve had a lot of positive feedback and we are planning on continuing the tradition yearly. This year we have panels on agroecology, farm labor and guided breakout session covering research methods, policy change, media and creating tools using data. I am looking forward to what promises to be an enlightening and inspiring day.

Editor’s Note: I interviewed Dr. Sifuentez about his book and more last fall. Read that Q&A here. The

book – Of Forests and Fields: Mexican Labor in the Pacific Northwest – documents the stories of those who labor, often invisibly, to feed us. Readers can learn more about the Bracero program, which brought millions of guest workers from Mexico to labor in America’s fields, forests and canneries. I read the book  and highly recommend it…on my list of 2016’s best reads.

There’s still time to participate in the Rural Justice Summit; sign up here. The California Institute for Rural Studies – which is a key player in the summit – is celebrating its 40th anniversary; look for a story about that soon.

Elliott Campbell on the potential of local food 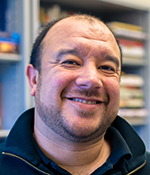 Dr. Mario Sifuentez is on faculty at the University of California, Merced, in the heart of the California’s Central Valley. His current work focuses on farm workers, water rights and food equity in the Central Valley.

The son of immigrant farm workers from Mexico, Dr. Sifuentez grew up in rural Oregon. As a child he read voraciously even while working alongside his parents in the onion fields. At an early age he became acutely aware of injustice; this had a profound effect on him.

He attended the University of Oregon and became involved in campus politics. He held various leadership positions in M.E.Ch.A (Movimiento Estudiantil Chicano de Aztlan), the Multicultural Center and student government. Along with other activists, he founded the Oregon Students of Color Coalition, an organization committed to fighting for educational access for students of color. He graduated with a triple major in History, Ethnic Studies and Political Science. He received a Masters in History from the University of Oregon.

Dr. Sifuentez earned his PhD at Brown University. While at Brown, Sifuentez worked with his mentor Matthew Garcia on the award-winning Smithsonian exhibit on Braceros. His book – Of Forests and Fields: Mexican Labor in the Pacific Northwest – was recently published by Rutgers University Press.