The local food movement was born in California. This is one reason why Californians have begun to understand that protecting state farmland is key to protecting the state’s food supply.

Recently the California Air Resources Board held a meeting to showcase a first round of modeling for the State’s 2030 climate change scoping plan. AFT was there to ensure that farmland conservation is viewed as an important strategy for meeting California’s climate goals.

Every year, on average, California loses 40,000 acres of farmland to urbanization. This amounts to more than 1.4 million acres since the state began tracking the issue in 1982. Unfortunately, the best farmland (classified as Prime) is being lost the fastest due to its proximity to urban areas and ever-creeping urban sprawl. However, there is new momentum at the state level to address the issue.

Last year, AFT released a new report showing that urban land uses generate significantly higher greenhouse gas emissions than farmland. This adds to the growing body of research, including that of UC Davis’s own Dr. Louise Jackson, which indicates conserving farmland is key to stabilizing emissions. According to AFT’s own calculations, cutting farmland loss in half by 2030 and by 75 percent by 2050 would have greenhouse gas savings comparable to taking 1.9 million cars off the road each year.

In fact, after comparing the greenhouse reduction potential of various agricultural practices documented in the scientific literature, the Duke Nicholas School for Environmental Policy Solutions (2014) concluded that: “Because average greenhouse gas emissions from urban land uses are orders of magnitude higher than those from California croplands (approximately 70 times higher per unit area), farmland preservation, more than any of the other management activities, will likely have the single greatest impact in stabilizing and reducing future emissions across multiple land use categories.”

These truths are widely enough acknowledged that the Strategic Growth Council—which is comprised of state agency secretaries and three public members—allocated nearly $45 million of cap-and-trade funding to farmland conservation projects over the past two years, permanently protecting more than 33,000 acres. These investments are intended to complement efforts by communities to further reduce greenhouse gas emissions through projects that support infill and compact development.

In September, the state released a new white paper, Vibrant Communities and Landscapes, A Vision for California in 2050, which will serve as the state’s guide for land use development decisions and prioritization through the year 2050. The strategies described in A Vision for California in 2050 are closely tied to the state’s ambitious greenhouse gas reduction targets under California Assembly Bill 32 and California Senate Bill 375. In the white paper, the state pledges to set conversion reduction targets for natural and working lands, something that AFT has been advocating for years.

The private sector is catching on as well. At this week’s Economic Summit, where leaders rallied around California’s “One Million Challenges,” the Working Landscapes Action Team presented a set of recommendations that included setting statewide conversion reduction goals. The group reiterated that protecting farmland at the urban edge provides incentives for cities to increase the supply of homes near transit, revitalize community centers, protect important aquifer recharge areas and maintain agriculture-related jobs.

California is in the midst of a housing crisis, and we need to build more homes in our communities. However, we need to do this much more efficiently going forward. The average housing density in the state is 9.4 people per acre, but in California’s key agricultural region, the San Joaquin Valley, it’s more like 6 people per acre (check out our report, here).

While we’re seeing farmland conservation increasingly incorporated into state policies and investments, a parallel challenge is getting local governments on board, since that’s where most land-use decisions are ultimately made. AFT has been engaging there as well, working with Local Agency Formation Commissions to protect farmland, supporting anti-sprawl ballot measures, and helping create model policies that help communities plan for compact growth.

One thing is clear: California is losing farmland. Once it’s developed, you can never get it back. The Air Resources Board will continue refining its climate modeling in the coming months. Please consider letting them know that while on-farm management practices are important for mitigating climate change, preventing farmland conversion in the first place is vital to meeting California’s climate goals.

To learn more about farming from the producer perspective, read: 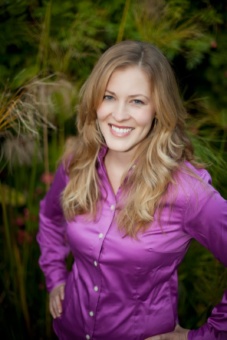 Virginia Jameson is California’s Deputy State Director for American Farmland Trust in Sacramento, where she advocates for the development of policies to protect California’s farmland. She has a dual master’s degree in International Affairs/Natural Resources and Sustainable Development from American University in Washington D.C. and the United Nations mandated University for Peace in Costa Rica. She holds a bachelor’s degree in Environmental Studies from the University of California, Santa Cruz.

Virginia grew up in Salinas, California, surrounded by beautiful agricultural land. Previously, she served as a Management Specialist for the Monterey County Agricultural Commissioner’s office, where she worked as part of a special liaison team with the county planning department to develop an agricultural land mitigation ordinance. She also previously served as a board aide for Monterey County Supervisor Jane Parker, and as associate director for the Ag Land Trust, where she oversaw the permanent conservation of 3,000 acres of agricultural land. Virginia continues to serve on the Ag Land Trust board of directors.